Gordon Hayward grew up loving basketball in a state that embraces the game above all others.

Though he was born in Indianapolis, Gordon was raised in the small town of Brownsburg, which sits just outside of Indiana’s capital.

He adored the game so much that at the age of five he and his father wrote down a goal – to play in the NBA.

But early on, it looked like that story just wasn’t meant to be. Son to two parents measuring at 5’10”, Gordon was told that he was looking at a ceiling somewhere around 6’2”.

As a 5’11” high-school freshman, he was hoping and praying for every inch he could get. 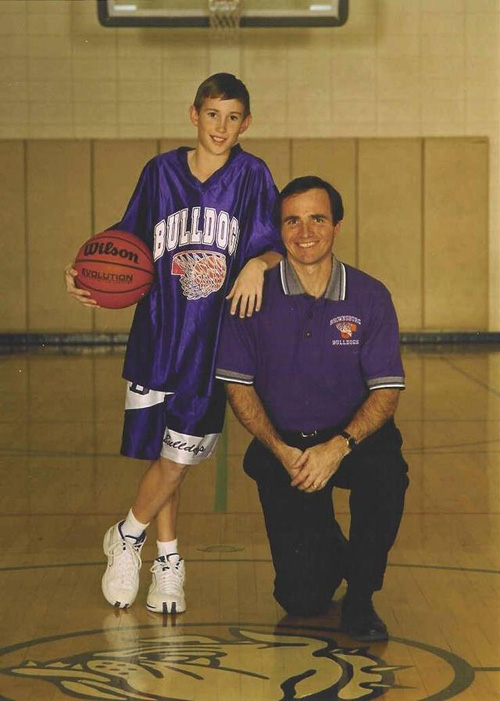 “I was praying I was going to be 6-2, because that’s what my doctor said I might be able to be,” he said.

In the meantime, he focused on building the skills that would set him up for success as a guard. With his father, Gordon Sr., he trained to be the best ball handler, outside shooter and facilitator he could be.

Another point of emphasis: the charity stripe. Along with his father, Gordon practiced a free-throw shooting drill named after Indiana Hoosiers great Steve Alford, who stands as one of the best free-throw shooters in NCAA history.

“[My father] was my coach all the way up until high school,” says Hayward. “He was getting me up every morning before school and we’d go out into the backyard. We had a drill called the “Steve Alford Drill”, being from Indiana Steve Alford was one of the best shooters to ever play there. We did his drill before school in the morning and then [my father] would go out and shoot free throws with me.”

Now a sound 80-plus percent free-throw shooter for his career, the skills G-Time developed as a kid growing up in Indiana have served him well to this day.

But while smooth handles and an accurate shooting stroke can make for an outstanding player at the high school level, Gordon knew that a career in the game wasn’t likely if he didn’t break out of his 5’11” mold.

Luckily, he already had a backup plan on a different kind of court. Gordon and his twin sister, Heather, both starred at tennis. He and his sister were a fantastic mixed doubles pair, and Gordon began to dream of winning the state singles title and perhaps earning a collegiate scholarship in tennis.

Knowing the rigors that most tennis stars go through to make it to the pinnacle of the sport, Gordon considered abandoning his dream of playing basketball altogether—but mom wouldn’t allow it. Jody Hayward, ever the supportive mother, urged her son to not give up on his lifelong goal.

“My mom told me to stick with it. Basketball was always my first love and what I loved doing way more than tennis,” Gordon said. “Then I had a big growth spurt and it all went from there.”

That 5’11” freshman sprouted to 6’8” by his senior year. Suddenly, the kid who was a solid guard had turned into an incredible, unique swingman with a guard skill set.

Standing at 5’10” himself, Gordon Sr. sees his son’s genetically inexplicable height as some kind of divine intervention.

“It was definitely a gift from God,” Gordon Sr. said of his son’s growth spurt.

He turned almost into a different player overnight. As his high school coach Joshua Kendrick described, it was “like a kid discovered superpowers.”

While the sudden sprouting put Gordon within reach of his goals, his college recruitment didn’t take off quite the same. Most players end up on the radar of schools far before Gordon was able to due to his height.

So Gordon had to dominate the high school game to earn his recognition—and by the end of his career, he did just that. As a senior, Gordon was first-team All-State, recording 18 points, 8.4 rebounds and 3.6 assists per game. He was also named Player of the Year by the Indianapolis Star.

His crowning moment came in the 4A state championship game. Gordon’s Brownsburg team trailed Marion High School by one point with 2.1 seconds left on the clock. The long inbound down low was batted around, but G-Time was there to corral the loose ball and hoist up the game-winning layup at the buzzer, giving his team the state title in a 50-49 win.

By the time that humongous shot went down, a few colleges in the Hoosier State, knew of Gordon. IUPUI, Purdue and Butler each extended him a scholarship offer.

It was a dicey decision. Should Gordon play for Purdue, his parents’ alma mater and one of the Big Ten’s most dominant programs? Or should he stay a bit closer to home and spurn the Boilermakers for Butler?

The Bulldogs’ young head coach Brad Stevens pushed hard for the services of Brownsburg’s star. After several visits and meetings, Stevens had done his best to sell an NBA dream and a players-first, academically accommodating program to Gordon and his family.

When he made his final pitch, Stevens sat back and just prayed that the humble Hayward would call to accept the offer.

“I was blown away with him,” Stevens said. “And what really stuck out was no matter what he did in high school, it looked like it would translate right to college.”

“We just felt like he was a good basketball player, and he knows it. But he has no idea how good. He sat in there, a pretty quiet and reserved kid. He left our office, and boy, we were hoping and praying we would get that phone call.”

After consideration, Gordon decided to make that phone call, choosing to attend Butler along with his twin sister and best friend, Heather. The Haywards were going to be Bulldogs.